skip to main | skip to sidebar

About George Tsongas in my Life 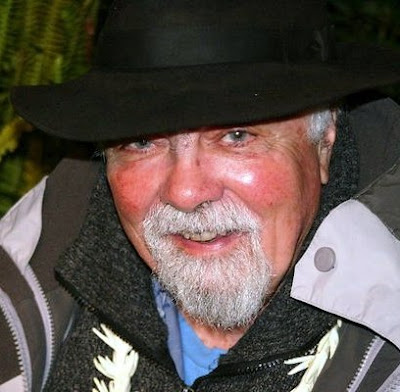 Veteran poet George Tsongas (1926-2010), a landmark in San Francisco's poetry scene, died in an acute care hospital in San Leandro, California, on January 15, 2010. He was 83 years old. Throughout his lifetime he maintained that his job as a poet was to "describe reality beyond sight."

"When I first came to San Francisco in 1976 I lucked into and rented a tiny studio apartment on Telegraph Hill, three steep blocks up from Café Trieste. I immediately felt at home in what I called 'my village', which was clearly delineated and was proud and autonomous among the surrounding neighborhoods. North Beach was an Italian village and suited my European roots and aesthetic. Industrious Italian immigrants raised up their families and businesses there, held the majority of property there, lived out their senior years there. Italian was spoken and so was poetry. There was a benign coexistence between 'Little Italy' and its Bohemian enclave which incorporated iconic literary haunts like Ferlinghetti's City Lights bookstore. Poetry was as much a fact of life as were espresso and Chianti. I fast became a habitué of the passionate poetry readings at Bannam Place, the Old Spaghetti Factory and many other neighborhood hang-outs where poets held forth. These places and the faces that populated them live on in my memory. It was there that I met George Tsongas.

By the time I arrived, George Tsongas, who came to San Francisco in 1945, occupied the solid position of well-known and outspoken resident poet with a sizeable following. After having had many animated conversations about poetry, people, politics and travelling, George and I struck up an easy friendship that was based on a mutual curiosity about each other's experience and point-of-view and on a strong sense of camaraderie. I came to spend much time at his Victorian flat on Harrison Street and later at his digs above Enrico's on Broadway. Over a span of 30+ years I was an intimate witness to the creation of a vast body of his work written in a unique and no-nonsense voice. He developed and stayed true to his very own style, a style that I have characterized as intuitive, succinct, condensed, and packing a punch of realism that cuts to the core and is intentionally provocative. George Tsongas' passionate interpretations of the human condition are closely aligned with my own.

George would always give me typed pages, often smudged and dog-eared, of poems and bits of his manuscripts and various revisions thereof. I would always comment at length, a routine between us that he seemed to appreciate as much as I did. Ours was a relationship of trust and affection. He was at my wedding in 1983. I look at the old album: there he is, champagne glass in hand, big smile on his face, eyebrows as bushy as ever, but black with just a little grey beginning to show in the middle where his brows join. Our friendship outlasted my marriage by more than a decade.

When I stepped out as a poet in my own right, I adopted the same unabashed attitude in my writing that permeates George Tsongas' work. I, like him, remain unfettered from convention, affiliation, judgment, real or perceived boundaries. I believe that it is the trademark of the poet to exercise the ultimate freedom of creative expression.

Thank you, George, for having been and continuing to be a part of my life,"


GEORGE AT THE CAFE - A Snapshot

The old poet sits heavy in his chair at the Café
with a weight that years of swallowing-up
life's richest stew of sweet and sour
have layered on his frame.

This is a man who would not be seduced with dainty trifles,
with empty fluff of palate or philosophy.

This is a man who tasted the salty sweat of honest labor,
the earthy grit of native Greece,
the savory dishes of foreign shores,
the meaty texture of self-worth,
the tangy zest of love,
the bitter wormwood of corruption and of prejudice,
the allspice of the human condition at its most flavorful,
and all the fragrant herbs of Southern France.

His is a life compacted and metabolized
into a solid presence,
that is reflected in his every poem,
meticulously chiseled out on his old typewriter.

This is a poet who needs no muse for inspiration.
His own 'muse-ings' give voice to a wealth of insights into humanity
or inhumanity, as the case may be.

He is an island unto himself, untouched by the surrounding maelstrom
of artifice, indignity and plagiarism.
He is authentic, self-made, self-maintained, and often unapproachable.

Looking out from under the thick brush of his white brow
his gaze seems to be transfixed, in some private limbo,
while unbeknownst to the outside world his mind is playing
through the lines of his new poem like fingers on a keyboard.

His slowness of gait gives no outward indication
of his youthful agility of thought.

Disdainful of the scholars, the pundits, the consumers and society at large,
he writes for no one in particular
and follows the dictates of his own convictions.

After several failed attempts, George pulls himself up from the chair,
does two or three gyrations of his hips in order to relieve
the ache and stiffness in his bones, and, giving a nod
to the proprietor of the Café, shuffles down Columbus Avenue.

(From CIPHERS OF UNCOMMON ORIGIN - Poems By Ana Elsner)

Ana added this footnote: The café in the poem is Café Puccini, owned by Graziano Lucchese, where George would often go to take a break.

---
This is a message for Ana Elsner

"Dear Ana,
What you have shared about the history of when you first came here was very interesting to me. I didn't realize you had been here so long. I sure did enjoy reading about your friendship with George. It is easy to see how you two experienced mutual respect and understanding of each other. You have much in common. Both strong in your independence, neither of you suffer fools, and you shared an international viewpoint as well. And I do love your poem for George.
peace and love,
Nicole"

Ah to the original amongst us. He reminds me of a friend I had in Alaska, a Professor and scholar who was disturbingly gruff if you weren't yourself around him. I really like the poem, it so reminds me of my Pav.

When Ana Elsner was asked by one of her students how she came to be a poet, Elsner said with a wink and a smile:

"While spelunking in the bowels of literature, I stubbed my toe on the gnarly root of a poem, pried it loose and put it in the jar of collected inspiration on the windowsill of my mind. It soon sprouted and migrated to my neo-cortex. There it grew into a rich tissue of images and vocabulary that I tease and whittle into poems for others to stub their toe on."

Let her take you along on her Journey
.

Ana Elsner's Past Events and Appearances

The Directory of American Poets and Writers

A SELECTION OF POEMS BY ANA ELSNER ON THE WEB

The Intervention Rhapsody In Three Movements 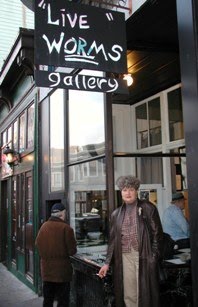 Der Dreischneuss - A German language collection of poems and prose

Research any topic
on Wikipedia

A useful tool for international web-surfing

: any text
in any language